You are here: Home / About / Personal / Photography Great white shark: this was actually on a dockside poster I passed in Cape Town It always pays to look up, to see bats, shooting stars, or this statue at the top of Haymarket, London

Sometimes an image speaks way louder than words, a key reason why I have always used visuals in my presentations. This started with carting around carousels of 35mm slides, with slides made by external designers at considerable cost, through the present day, where it is very much DIY. There are few things I enjoy as much as photography, shading through into the task of creating engaging slide presentations.

I remember the architect Moshe Safdie saying decades ago that he threw his camera away because he ended up seeing everything in a frame—and wanted to see the world as it was. While I sympathise, it’s also the case that carrying a camera can encourage you to look at the world with much greater attention than you might otherwise, or at least that has been my experience.

My camera continues to be a key element of my toolkit—not the one in my BlackBerry (which I have almost never used), nor the one in my MacBook Air (though I sometimes use that for Skype sessions), but the third of the Leica D-Lux 4s I have owned, whose size and optics suit me very well. The results can be found in the blog/Journal section of this website. This habit is something else I got from my father, who carried a camera with him wherever he went, even in Russia during WWII. He also got me into the habit of keeping massive photograph albums, early ones in RAF albums, later ones from the wonderful—and sadly missed—business run by Tessa Fantoni.

That said, many of the images in the blog section of this website, at least up to July 2014, have degraded since we were forced to migrate the website to a new server. Part of what I love is ‘found structure,’ as shown in the photo above of part of San Francisco’s MOMA building

I have been delighted when my photographs have been used by others, though sometimes the circumstances are sad. Among the highlights of 2011, for example, was the use of a photograph I had taken many years ago of (Sir) Geoffrey Chandler, who sadly died during the year, in obituaries published in The Financial Times, The Guardian and The Times.

In what follows, I will run a short sequence of images on wings, one of my fetishes, and then a number that go way further back.

Shot in a Bond Street window A moment of respite: photographed when I was in Holland to talk to the board of a major company

Spied in the streets of Bogotá, Colombia In the streets of Adelaide, Australia Over more than 40 years of photography, I have owned an extraordinary evolutionary sequence of cameras, starting off with a Box Brownie and then running through a Braun Super Paxette (which I borrowed from my father when six of us set off for Greece in 1970—and managed to mash up with a bag-full of prickly pears), a Leica M3 (which I bought from a German friend, Frank Stop, in the early 1970s and which Elaine sold at auction for significantly more than I paid for it some 20 years later), a Nikon (AF/F-801), a Sony (DSC-F717) and then a series of Canon IXUS cameras, including one I was given by a Canon Managing Director on a visit to the company in Japan. That gift sparked quite a debate back at the office about what gifts we should and should not accept. SustainAbility then developed Guidelines—Volans, too.

Most of the images on this site were taken digitally, though some—like the one of Gaia on Gigha in this section—were shot from print originals in photograph albums. Whatever the camera of the moment may have been, one of my great pleasures over the years has involved compiling huge, complex albums of the results, collaging the images together in ways that probably have their roots in my childhood—when I loved poring through my father’s many photograph albums and lined my room in collages cut from my father’s and his mother’s National Geographic magazines.

In the end, that way of storing photographs became too much, so that I was constantly at least 2-3 years behind. And then came the blog—and an alternative way of sharing images and the stories that go with them.

With photographs scattered throughout this website and blog, I don’t need to say much more on just how pervasive this vice has been in my life, but what I originally hoped to do in this section was to create a gallery for some the photos that wouldn’t otherwise have made it onto the site: 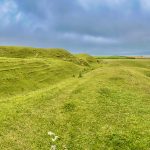 Ever since my Bryanston School days, I have loved hill forts like Hambledon and Hod Hill, where we would often repair back in the day, typically with a flagon or two of local cider. All of which built on a love of castles honed in places like Cyprus in the 1950s. Happily, Dorset and its […] 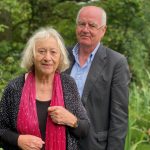 Just back from a wonderful few days with Julia Hailes and her husband Jamie Macdonald at Hooke Farm, after our time with Bryanston School (30 June entry) and Kingcombe National Nature Reserve (1 July entry). It’s never easy to capture adventures in wonderlands, but here are some images spotlighting some elements of what happened when […] 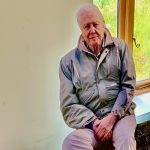 Although I have long been a believer in serendipity, it rarely acts as full force as it did today. On the second day of the Bryanston Green Conference, Elaine and I were allowed to duck out and were lucky enough to be gifted a car for the day by Julia (Hailes) and her husband Jamie […]