You are here: Home / About / Professional / CounterCurrent I have always been fascinated by fish and water: these were in Istanbul

Like it or not, much of what I have done over the years has involved swimming upstream, against the current.

Much of this has been expressed in writing. And CounterCurrent is a vehicle I developed, to replace the original John Elkington Associates, eventually mainly absorbed into SustainAbility, as a largely virtual platform for those aspects of my working life that involved book writing. Or were in some way more speculative than my mainstream organisations quite knew what to do with. A key part of the work here has been a series of book projects, the latest, The Breakthrough Challenge: 10 Ways to Connect Today’s Profits With Tomorrow’s Bottom Line, being co-authored with Jochen Zeitz.

So how do you assess the impact of books? True, I have been told by several highly influential people (including Jane Nelson of Harvard’s Kennedy School and Cleantech Group founder Nick Parker) that my 1987 book The Green Capitalists (with a final chapter from Tom Burke) helped spur them to move out of the mainstream and into the emerging sustainability area. Yes, our Green Consumer Guide went into 20 foreign editions and sold around 1 million copies. And, yes, Cannibals With Forks spread the concept of the triple bottom line around the world.

But often it’s the weirder, around-the-houses connections that suggest the significance of some of the ripple effects.

Here’s an example. One of the odder experiences of my life was seeing my book The Poisoned Womb (Pelican Books, 1985) book referenced in a poem by Ted Hughes published in The Times (see ‘from Under the Carpet,’ page 837 in Ted Hughes, ‘Collected Poems,’ Faber & Faber, 2003) and also on pages 538-9 in his collected letters (‘Letters of Ted Hughes,’ collected and edited by Christopher Reid, Faber & Faber, 2007). To add spice to the story, Hughes noted in the poem that he had sent a copy of the book to Margaret Thatcher when she was Prime Minister. Tom Delfgaauw, when at Shell, saw a key part of what we brought to the table as “constructive discomfort”

There are many examples of our impact over the decades, but some are hard to see, at least initially. I have sometimes described part of my role inside business as serving as “grit in the corporate oyster.” Managing the tension between challenge and support is a complex task, but one I seem to have acquired over time. But how do you measure the impact of such work? Stop the clock at one moment at in the process and you are likely to find a certain amount of client unease. Stop it later and you may well find that real value has been created, just as that grit in the oyster becomes the seed of the future pearl.

And the provocations have come in many forms. Take the time capsule in the Princess of Wales Conservatory at Kew Gardens, for example. The idea of the capsule was Elaine’s, during a dinner with Joss and David Pearson of Gaia Books. I had been part of the Gaia Atlas of Planet Management team, serving as  a Contributing Editor. The capsule (see below) went into the floor of the new greenhouse in 1985. Gaia and Hania sat on David Attenborough’s knees as he prepared to lower the capsule into the ground, containing a copy of the Gaia Atlas of Planet Management and seeds of plants thought likely to go extinct in the coming decades.

Our task over the coming decades is to push upstream against that flood tide of extinction, until (unlikely though it may seem today) the tide turns. And forty years after coming up with the idea, I still think that the idea of creating ‘blended value’ (Jed Emerson’s term) or ‘shared value’ (Michael Porter and Mark Kramer’s term) right across the ‘triple bottom line‘ agenda is a helpful way of thinking about all of this.

But pushing counter-current against my own biases is going to be a critical part of what we call the ‘Breakthrough Decade’ (see ‘About’ page), so I hope I’ll be around to see how all of this has worked out in 2025, which would be my fiftieth year in the field. (The time capsule isn’t to be opened until 2085, incidentally.) 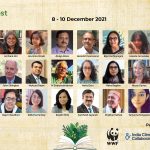 I have literally lost count of the scores of keynotes and speeches I have done in recent months, but one that stands out – and I was reminded of it by an email today – was India’s first Green Literature Festival, where I did the opening speech on Wednesday 10th December. A fireside chat format, […] 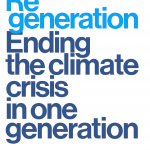 My review of Paul Hawken‘s stunning new book, ‘Regeneration: Ending the Climate Crisis in One Generation’ appears on Medium today: https://medium.com/@volansjohn/hiding-seeds-in-our-hair-25a4034b038e…. Wanted to post before #GreenSwans Bookclub session tomorrow: https://us02web.zoom.us/meeting/register/tZUqf-moqT0pHtEI86zT1GDt9IZIi_HdgvE8…. Delighted to say that the EU and Commonwealth edition ends with an afterword from me. 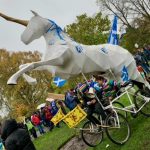 The International Society of Sustainability Professionals has posted my piece on the generational aspects of the COP26 climate summit.