Looking back, I have been fairly early into areas like personal websites, blogging and tweeting, always interested to find new ways to learn and communicate. The origins of this website lay in a desire to capture what it was like in the relatively early days of the evolving environmental, social innovation and sustainability movements.

The idea was also to explain to the wider world what we were doing and what was working, and what wasn’t.

A decade in, however, our original webmaster absconded to New Zealand. Still, dark clouds, silver linings. I am still immensely grateful to Geoff Kendall, Sam Lakha and Chris Wash for wading in and rescuing the bulk of the old content.

Now the site is evolving for the next stage in my thinking, built around the idea of the Green Swan. More, as they say, anon.

And, by way of background, here is some archive text from the old site which explains some of the original reasoning behind the site:

Finally, for the record, here is the text in which the original logo designer, Rupert Bassett, explained the origins of the fish logo:

Part of the original CounterCurrent design for this website, by Rupert Bassett

John’s original design brief was to produce graphic imagery which would convey the idea of “swimming against the stream”, a strong metaphor for his campaigning lifestyle. In addition to this, as he communicates using many different forms of media, I was looking to create a flexible graphic system which could be applied quickly and consistently across multiple formats.

The Generic Form
After some study of streaming water and the mechanics of fish propulsion, I found an answer to the brief in the similarity of the forms involved in “swimming against the stream”. Wave patterns, scale textures, shoal paths and river flows all employ the same sweeping curves.

The solution was to create a single generic graphic form, from which all other graphic imagery required could be built by the simple process of repetition. The generic form was constructed using two dynamic sweeping curves, giving an apparently organic and naturalistic shape, without closely representing any specific identifiable aquatic lifeform.

Repetition
The most effective orientation for the generic form is moving “upstream”, emphasised by a background pattern generated by the repetition of the form which moves “downstream”. The background employs a diagonal repeat in the direction of the “head” of the form which emphasises the movement. More naturalistic patterns can be created by the deletion of a random number of shapes from the regular pattern. Colour transparency adds depth to the background.

The curves of the generic form were very carefully located within a grid structure of regular squares. This grid structure is an essential device to facilitate the regular repetition of the generic form in the creation of graphic imagery, and for the integration of other design elements. Any typographic or photographic forms can be sized and positioned according to the dimensions of the grid. 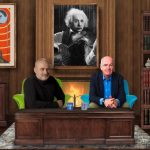 The latest in my Green Swan conversations reworked by Topia features sci-fi giant David Brin. What a joy! 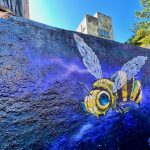 After getting back into São Paulo from Paraná, Louise and I were picked up by Nina, a sister of a friend of Louise’s in Denmark, who drove us to Vila Madelena. We walked around this high creative quarter of the city, centre of bohemian culture and art. A visual feast. Fascinating visit to a cooperative […] 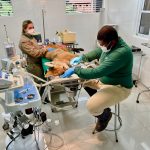 The adventures continue. Yesterday, we were flown to Paraná in a small, private Citation jet – though we were assured that the emissions were being offset as part of the previous day’s event. Four Klabin people accompanied us, including Klabin’s Chief Technology Officer, Francisco César Razzolini. Among other things we were given a guided tour […]