I am often asked what exactly it is that I do, whether at SustainAbility or elsewhere. Difficult. When filling in the ‘Please state profession’ line on passports and other forms I have long been tempted to write ‘Babelfish’, which I’ll explain in a moment.

But for 30 years the question I have been asked most often is what first switched me on to environmentalism and, later, sustainable development? Some answers can be found in my book A Year in the Greenhouse, in the Influences and Timelines sections of this website, and in an article I wrote some time ago for Jain Spirit magazine.

And the website? It’s a fairly natural outflow from work I have done under the guise of John Elkington Associates (JEA), founded by my wife Elaine and I in 1983.

The site in no way diminishes my commitment to SustainAbility, rather it provides a channel for material (some might say flotsam and jetsam) and meandering commentary that would not naturally find a home on the SustainAbility website (www.sustainability.com). Probably the most conspicuous example of that is my ‘blog’, which can be found on the Journal page.

Propellants In compiling this website, with the help of Rupert Bassett and Lynne Elvins, I was forced to plumb my core values, powerfully shaped by pressures and opportunities described elsewhere on the site.

Eight values that bubbled to the surface were:

– Intuition Facts only get you so far

These values also eddy through the visual aspects of the site, including the logo. Click here for Rupert’s explanation of how the imagery evolved.

And the Babelfish? Here’s the story. My work has often run counter-current, hence the imagery of fish swimming against the flow. At Volans Ventures and SustainAbility, too, we aim to drive the discussion of problems upstream – from symptoms to causes – in pursuit of real cures. But maybe the story runs deeper still. I was born in a mill-house cottage on an island in the Kennet, a tributary of the Thames. Later, as a child, I would find myself surrounded by elvers on a moonless night in Northern Ireland, or communing with wildlife along rivers in Gloucestershire, Somerset and Dorset.

Looking back, you see links. My first major professional project involved fighting to protect part of the Nile Delta wetlands. That, in turn, led to my first article for New Scientist, in 1975. Several years of writing for New Scientist, while working with John Roberts at TEST, led directly to 1978’s invitation from Max Nicholson andDavid Layton to co-found Environmental Data Services (ENDS). And when I left ENDS in 1983, we leveraged my experience with business to launch JEA and then, in 1987, SustainAbility.
Post-1987, JEA served as a flag of convenience for a series of book projects. The website project, however, helped refloat the vessel. And once we had decided to use fish for our new logo, the imagery proved surprisingly apt.

Fish, it turns out, symbolise reproduction, life, freedom, the emotions, our unconscious, the quest for enlightenment, flashes of intuition, prophecy, fertility, plenty, prosperity, good luck, longevity and rebirth. Salmon, the ultimate homing fish and recently returned to the upper Thames, near our London home, symbolise wisdom – vital in a world flooded with data and information.

And that’s where the Babelfish fits in. Brainchild of the late, great sci-fi author Douglas Adams, it was billed as the universal translator. Slip the creature into your ear, we were told, and you could suddenly understand all the Galaxy’s languages. If any one organism symbolises my aspirations, and my work across the turbulent, blurring boundaries between business, financial markets, governments and civil society, this is it.

And, finally One {LOWER CASE O] ingredient that several people missed when I circulated a late draft of the website for comment was Elaine’s view on all of this, on – as Francesca van Dijk put it—’how you, and SustainAbility, have developed over the years’. So Elaine’s perspective is also available on this website. By the time the site launched in 2003, she and I had been together for 35 years and married for 30. Our ongoing conversation has been a crucial wellspring of much of my thinking. Her constant support, in all sorts of ways, has been key through all the ups and downs.

So my profound thanks to Elaine and to our daughters, Gaia and Hania, for their forbearance, support and advice.

* Given our work over the years on such issues as corporate reporting and assurance, some might expect to see some sort of verification statement here. What’s fact, what might be fiction? As a form of verification, we sent out drafts of the website for comment. Changes were made—and in some cases are noted. Interestingly, however, the science of memory suggests that memories are far from static. The process of remembering something can render the memory fluid, open to reinterpretation and embellishment (John McCrone, ‘Not-so total recall,’ New Scientist, 3 May 2003—and www.newscientist.com). So the invitation to comment is ongoing. 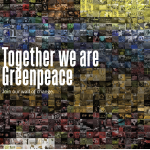 Thrilled to be on the Greenpeace UK Wall – are you? 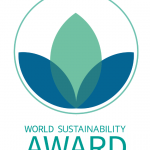 Did my acceptance speech this afternoon for the 2021 World Sustainability Award, sponsored by the MDPI Sustainability Foundation. More details here. The $50,000 in prize money will be invested in developing the Green Swans Observatory. 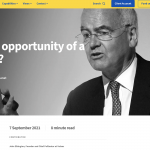 Another interview, this time with Mary Ziegler of Aviva Investors. One quote: “Changes are harder to achieve when you have a fragmenting political landscape.”